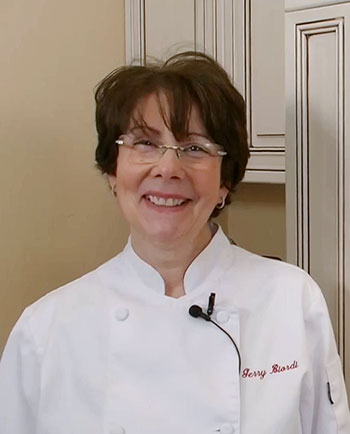 Gerry Biordi developed a passion for cooking Italian food while living in Bologna, Italy for many years.  In Italy, she learned to cook from the best possible teachers - Italian mothers and grandmothers!

After returning to New York, Gerry decided to polish her culinary knowledge and attended the Institute of Culinary Education. At the same time she interned at La Cucina Italiana where she began cooking for their catered events.  She also became involved in their recipe testing and prepared food for their photo shoots. After graduating from the Institute of Culinary Education, she started her own Catering and Meal Delivery Service named:  "Sarabella Cooks"

About 8 years ago Gerry gave up the physically exhausting catering branch of Sarabella Cooks and started teaching at Rustico Cooking in NYC. She is head chef at Rustico, leading team building cooking events and orchestrating private parties where everyone learns to cook together.

Gerry created this website to offer her cooking knowledge to a larger audience.  She has a firm belief that everyone can and should have a delicious dinner (or lunch!) made with whole foods and unprocessed ingredients, and be able to cook it easily after a hard day at work.